SAN FRANCISCO — Jim Stephens got the text at 8 p.m and was so excited he couldn’t sleep. He had an appointment the next morning to get the COVID-19 vaccine at the city’s first mass vaccination clinic.

The 76-year-old drove up just after it opened at 8 a.m. and was waved into a line of cars flowing slowly but steadily through a temporary chain link fence. He drove down a line of volunteers, making choreographed stops.

First, his appointment paperwork was checked. At the next checkpoint, he was given a surgical mask. A few feet further, a volunteer went over possible side effects.

Finally, he rolled up to the table where a nurse stood ready to give him his shot.

“Frankly, I was nervous that they would run out,” Stephens said from the seat of his car just before his injection. Still clutching his appointment notification, he looked around, a huge grin on his face. “This is fantastic. Now I feel wonderful.”

As part of President Biden’s COVID-19 strategy, such mass vaccination clinics will soon become familiar to millions of Americans. The Federal Emergency Management Agency could begin running up to 100 high volume sites nationwide within a month to help reach the administration’s goal of giving 1.5 million shots a day during Biden’s first 100 days in office.

“These kinds of mass vaccination sites will be a significant, and maybe even a major, part of vaccination everywhere,” said Dr. Joshua Adler, chief clinical officer for UCSF Health, which is co-sponsoring the site.

Communities are largely coming up with their own mass vaccination plans, sometimes based on COVID testing sites, but they don’t have to reinvent the wheel for COVID-19. High-volume clinics can be based on templates for influenza vaccinations developed and refined by public health and medical experts since at least 2005, said Dr. Kelly Moore, deputy director of the nonprofit Immunization Action Coalition.

States have drilled on these types of clinics for years, Moore said, and her organization has begun to collect resources for conducting such clinics and post them on a central website.

Over the weekend in Delaware, nightmarish lines at two mass sites on Saturday gave way to a more orderly system by Sunday, with 11,154 seniors and health care personnel getting vaccinated. Extreme cold caused department of health computers batteries to run down, leading to registration issues, which were resolved with generators.

In New York’s Broome County, mass vaccination appointments had to be voided because a website scheduled them prematurely.

Even with a road map, a multitude of details must be worked out to run such a campaign. The complexity was on display in San Francisco, where the first mass vaccination site opened on Friday. As of Tuesday, about 2,500 people had received their first COVID-19 shot.

Officials plan to have a total of three sites in three corners of the city to make them accessible to most residents. The first, near the city’s southern edge, is in a parking lot slated to become public housing.

“It’s complicated, it’s challenging but we want to get vaccine out the door and into arms as fast as we possibly can,” Mayor London Breed said at a news conference Monday.

Adler described the setup as a “soft launch” with limited hours to work out kinks before the site ramps up to full capacity. A winter storm shut it down Wednesday but the city hopes to have it up and running again on Friday.

The speed at which everything came together was a welcome surprise.

“When I was told this site was going up in a few days I said, “Can you really do that?'” said Dr. Grant Colfax, director of the city’s Department of Public Health. “I owe a few people bottles of champagne now.”

The rate-limiting factor for San Francisco and many other locations is doses.

“This is not a people problem, this is a vaccine problem,” said Adler.

The city could be offering at least 10,000 doses a day at its sites if it had them. “That’s why we need massive supplies of vaccine,” Colfax said.

To get an appointment for now, people must be older than 75 and receive their medical care at UCSF’s medical center, which provided vaccine and volunteers to staff the clinic. As more doses become available, that will expand to include patients from other medical systems and those in the public health system. Some people over 70 have gotten vaccine when there were extra appointments.

The city is only offering as many appointments in a day as it has doses, so many patients don’t learn if they are among the lucky ones until the night before.

No one seemed to mind.

“The text came through on our 37th wedding anniversary,” said Ralph Keeney, 77. “We figured this was the best present we could have.”

The drill is simple but staff-intensive. On the first weekend, traffic officials and large lighted signs directed people to circle around the back of an enormous fenced parking lot next to a former concrete reservoir.

At the entrance, after getting a fresh surgical mask and having their paperwork checked, brightly-colored Post-It Notes were slapped on windshields, one for each person getting vaccinated.

The Post-It Notes were a Friday brainstorm by nurse Heather Taylor. She was giving shots and needed to quickly see how many people were waiting in line so she could be prepared with syringes. The handy, colorful sticky notes did the trick.

By Sunday afternoon, the practice had spread throughout the vaccination clinic; cars lined up in all eight lanes at the main entrance sported bright fluttering squares on their windshields.

Such on-the-ground tweaks are an example of the developing system. While there are playbooks for mass flu vaccination, COVID-19 comes with special requirements. Everyone must be spaced 6 feet apart, and those getting shots must be kept and observed for 15 minutes in case of adverse reactions.

“We started from scratch,” said Martha Cohen, the mayor’s director of special events.

“This is an event, it’s like doing a show. Only it’s a really important one,” she said.

If not for COVID-19 restrictions, the site could fit 50 of the rented plastic tents the nurses worked under, but factoring in social distance they could only have 28. To protect the vaccinators from traffic, the city rented bright orange, water-filled Jersey barriers and arranged them in a U-shape in front of their work areas.

At the vaccination tables, the nurses wasted no time.

“We’re aiming for just 10 minutes from the entrance to the shot and then a 15 minute observation period,” said Adler.

Inja Kim, 77, came prepared. She and her husband saw on the news that people waited in line for five hours at a mass vaccination clinic at Dodger Stadium in Los Angeles. But she never had time to eat her stash of Kind Bars, biscotti and granola bars or break into her thermos of hot tea.

The system for syringe delivery was low-tech but effective.

A temporary pharmacy was set up in a San Francisco City College building adjacent to the parking lot. There pharmacists took 10-dose Moderna vials out of refrigerators and drew down the vaccine into syringes. The syringes were kept in a refrigerator and taken out four at a time so none were unrefrigerated for more than the 60 allowed minutes.

Runners put them into red plastic containers and carried them out to the front of the building, where staff members in an electric golf cart waited.

Another clinic worker walked up and down the vaccine tents, checking to make sure each had enough vaccine. When more was needed, they held up a small green flag and waved it. That signaled the people in the golf cart to zip over with newly-filled syringes and take away the used ones.

“It’s working pretty well,” said Taylor, as she readied two shots for a couple pulling in next to her tent, its table covered with hand sanitizer, alcohol wipes, gloves and a stack of clipboards and forms.

Once vaccinated, people drove to a large parking area where San Francisco traffic control officers waved them into spaced spots. Doctors and nurses walked around the cars, checking for adverse reactions.

“We’re telling people to honk their horns or flash their lights if they’re experiencing any difficulties,” said Adler. “So far we’ve had very few.”

After 15 minutes, a final duo of traffic officers guided the vaccinated out the front entrance – and happily on with their lives.

John Paul Cruger-Hansen was one of them. The 77-year-old was so excited to get the vaccine he brought the international immunization certificate he got decades ago when he immigrated to the United States from Denmark.

“I was hoping they’d fill it in, COVID next to smallpox,” he said, showing off the fading yellow booklet. “This will totally change my level of happiness.”

His wife Debbie, too young for the shot, spent the visit taking photos and video of the entire process.

“We texted it to our daughter, we texted it to everyone,” Cruger-Hansen said. “The next thing is to get Debbie vaccinated, and then we can start to get back to normal.” 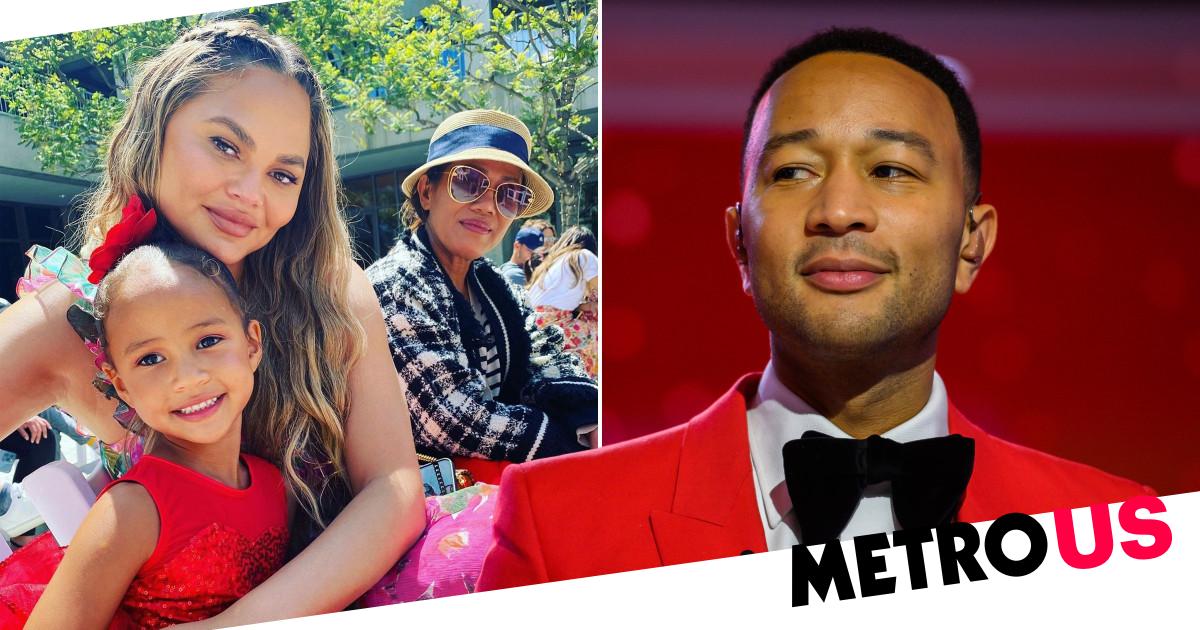 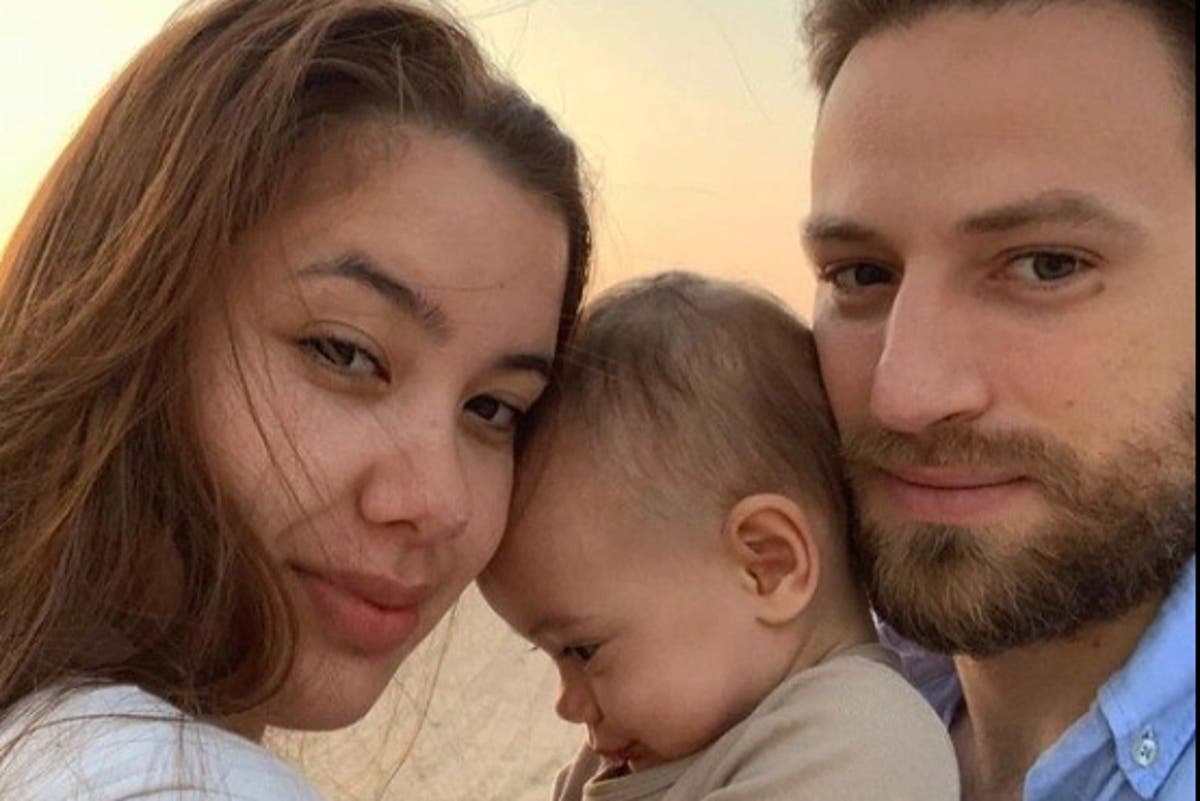 Husband of Caroline Crouch explains why he fabricated burglary plot 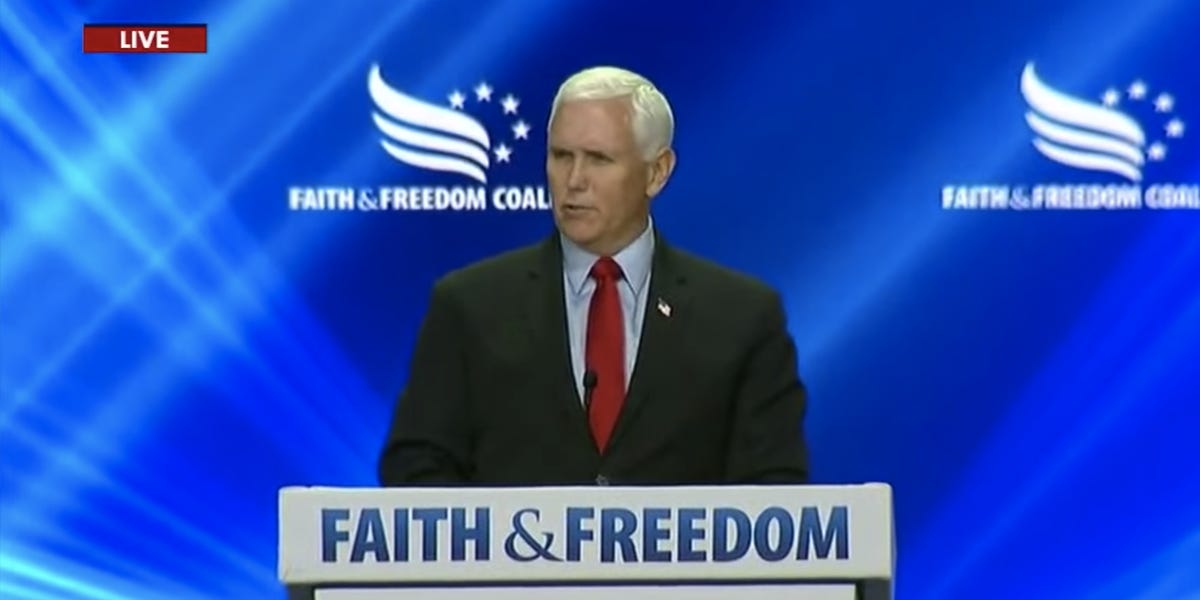 Mike Pence was booed and heckled with chants of ‘TRAITOR!’ at a conservative conference
6 mins ago

Mike Pence was booed and heckled with chants of ‘TRAITOR!’ at a conservative conference