One year after OnePlus loudly stepped into the midrange and entry-level phone market with the OnePlus Nord, it’s back with the OnePlus Nord CE 5G. That “CE” at the end of its name stands for “Core Edition.” OnePlus claims the new phone strips back some of its predecessor’s less necessary features to focus on offering its “core” features at a more affordable price, similar to what Samsung offers with its “FE” (fan edition) devices.

Like the original Nord, the OnePlus Nord CE is only getting a release in Europe and India, while US buyers instead have the Nord N200 coming later this month. The question for all of them is whether OnePlus has stripped back one feature too many or has it found the right balance of price and performance?

Look at the Nord CE next to last year’s phone and it’s clear they’re cut from the same design cloth. Both have an edge-to-edge OLED display on the front with minimal bezels, selfie cameras in a hole-punch to the top left of their screens, and a rear camera bump that arranges their sensors into a line. Like the original Nord, there’s no official IP rating for dust and water resistance, and no wireless charging.

Peer closer, however, and the differences become more obvious. For starters, there’s now only one selfie camera on the phone: the original Nord’s secondary ultrawide camera is gone, while the main selfie camera’s resolution has been bumped down from 32 megapixels to 16. On the back the main camera’s resolution has increased from 48 to 64 megapixels, and there’s still an 8-megapixel ultrawide, but the 5-megapixel depth and 2-megapixel macro sensors are gone, replaced with a single 2-megapixel monochrome sensor.

The Nord CE is a slender device to hold. OnePlus claims this is the thinnest phone it’s made since the OnePlus 6T, and at 170g (6oz) it feels relatively light considering its 6.43-inch screen. It’s tempting to claim that heavier devices feel somehow higher quality, but I think there’s something to be said for a device that’s thin and light enough that you can forget about it when it’s sitting in your pocket. Despite its thinness, the Nord CE includes a headphone jack, which was absent on last year’s phone.

The Nord CE’s battery is also technically bigger than last year’s Nord at 4,300mAh. But in my testing its battery life worked out a little worse in everyday usage. While the original Nord got upward of eight hours of screentime, the Nord CE was closer to six and a half in my experience. That was still enough to get me through a day’s use of Twitter, Slack, and WhatsApp with some battery to spare, and after a weekend of lighter usage, the phone lasted me until the middle of Sunday.

For charging, the OnePlus Nord CE 5G uses the Warp Charge 30T Plus fast-charging standard, so you won’t see the kinds of ultra-fast charging speeds we saw with the 65W-compatible OnePlus 8T and 9. Warp Charge 30T Plus is still fast enough to charge the Nord CE from 0 to 99 percent in an hour. In my testing it hit 32 percent after 15 minutes, 64 percent after 30, and 88 after 45. That should be fast enough for all but the most demanding of users.

Similar to battery life, which came out slightly worse despite ostensibly having better hardware, the overall performance of the Nord CE was a little more sluggish than last year’s phone. The CE is powered by a Snapdragon 750G processor. As you might guess from its name, the new processor technically sits further down Qualcomm’s range than the 765G in last year’s phone. But because it’s a more modern chip, OnePlus claims it’s actually faster, with 20 percent better CPU performance and 10 percent better GPU performance.

The switch has addressed one of my quibbles with the original Nord, which was that its display would hitch slightly when quickly scrolling through an app like Twitter, impacting the otherwise silky smoothness of its high refresh rate display. But the Nord CE’s performance just didn’t feel as snappy overall. Hopping between apps would occasionally cause the interface to hitch slightly or stutter as the system keyboard loaded in. That’s not an unusual tradeoff at this price (we observed similar performance with last year’s Pixel 4A, for example), but it’s worth mentioning in light of OnePlus’ claims about performance.

For the most part I think OnePlus has made some smart decisions with how to approach cameras on the Nord CE, even though, unfortunately, OnePlus’ much advertised partnership with Hasselblad with the recent OnePlus 9 hasn’t brought any benefits here. Three rear cameras is a more reasonable amount of cameras compared to the overkill of four on the original Nord. OnePlus has still allowed itself one useless rear camera on the Nord CE — a 2-megapixel monochrome sensor — but it’s easy to ignore.

Personally, I would have loved to see the ultrawide selfie camera return from the first Nord. It might not have been the most useful feature on an everyday basis, but it’s always great to have around when you need it.

Otherwise, I generally liked the photos I got out of the Nord CE. Daytime shots are bright and vibrant, even if the phone tends to lose some detail in shadows. In particular, colors are handled accurately when it comes to landscapes, with my only complaint being a slightly over-processed look I got when photographing trees.

But it’s in the edge cases where the Nord CE’s cameras stumble. Trying to take close-up shots of flowers left the phone struggling to make things look crisp and sharp, and faces had an unnatural smoothness to them. It can also struggle with detail in low light, like in the shot above of an apartment block where many of the individual railings aren’t discernible.

On paper, there shouldn’t be any competition between the OnePlus Nord CE 5G and the original OnePlus Nord. It’s the less expensive phone that still offers a high-refresh rate OLED display, 5G, plus improvements like a headphone jack, a higher resolution main camera, a bigger battery, and a faster processor.

But in practice the Nord CE just doesn’t feel as polished as the original Nord did. Its battery might be bigger, but you don’t get any more usage out of it, and its processor is technically faster but still leaves the phone hitching in heavy usage.

Those might be reasonable compromises considering the price difference, but as of this writing the original OnePlus Nord is available at a discounted £299 (about $418) price point on Amazon UK. At that price, the original Nord feels like the better option. 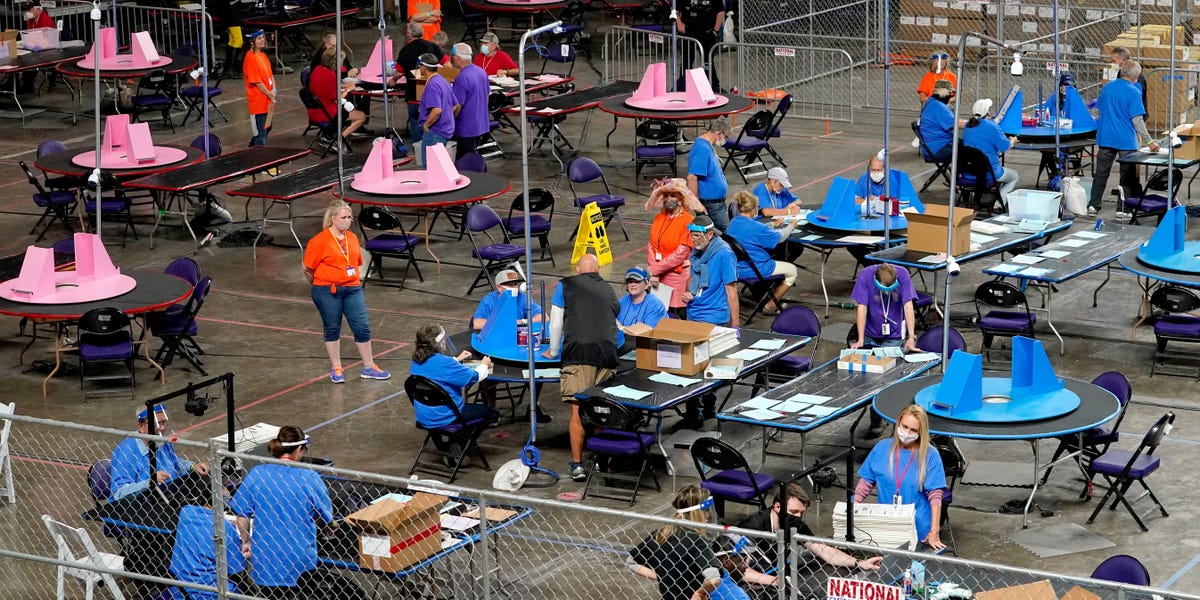 Maricopa County Board of Supervisors condemns election audit and new subpoenas: ‘There was no fraud’
6 mins ago

Maricopa County Board of Supervisors condemns election audit and new subpoenas: ‘There was no fraud’ Ohio House Races: What to Watch For
9 mins ago

Ohio House Races: What to Watch For