By Joshua Franklin and Krystal Hu

The 32-year-old test prep business owner from Denver invested $100,000 in shares of veteran hedge fund manager Bill Ackman’s special purpose acquisition company (SPAC), Pershing Square Tontine Holdings Ltd, after they soared 25% in December with no imminent deal in sight. This valued the blank-check acquisition firm at $5 billion, when on paper it was worth only the $4 billion it had raised in an initial public offering in July.

“There weren’t very many options for retail investors to get into the stock before its IPO. If I’m paying a 25% premium on the opportunity to ride Ackman’s coattails, to me it’s worth it,” Coreson said. He said his other bets on SPACs had paid off and that he had doubled a $25,000 investment in CM Life Sciences, which agreed earlier this month to merge with digital healthcare company Sema4.

An army of amateur traders that has fueled a rally in heavily shorted stocks, or “stonks,” such as GameStop Corp (NYSE:), has discovered the arcane world of SPACs. They are hearing about their obscure stock market tickers on social media, from TikTok to Twitter, and placing risky bets.

Although all stock investments involve risk, many companies going public by merging with a SPAC take risk to another level because they often are years away from generating revenues when they go public.

Churchill Capital IV Corp has provided the most vivid example of the pitfalls. Its shares had risen as much as 548% from its IPO, for a market valuation of almost $17 billion, following a Reuters report last month that it was nearing a deal to merge with luxury electric vehicle startup Lucid Motors at a roughly $12 billion valuation.

But the shares dropped 42% last week, wiping out over $8 billion in market value, after the deal was announced with a last-minute private investment that diluted stock market investors.

“It happens with every SPAC — buy the rumor, sell the news. Once the volatility goes away in a few weeks and months, I’ll be buying more again,” said one of the investors, James Goff, a 27-year-old machine operator from Bremen, Georgia. He said he sold most of his shares in Churchill Capital IV before they nosedived on the deal’s announcement.

A spokesman for Churchill Capital IV declined to comment.

As the speculation intensifies, so is the risk that amateur investors are willing to accept. Many used to snap up SPAC shares only after rumors about a potential merger appeared in the press. Now, they are driving up the shares of SPACs with no idea of a potential deal. SPACs do not tell investors in advance which company they will merge with, and are typically awarded up to two years to clinch a deal.

Some 25 SPACs have seen their shares rise more than 10% on their first day of trading so far this year, when no deal was in sight, compared to seven SPACs in all of 2020, according to Dealogic data. In 2019, the largest first-day trading gain was just 3%. Demand in the IPOs routinely exceeds supply by more than 10 times, investment bankers working on the deals say.

Demand for the $500 million IPO in January of Liberty Media Acquisition Corp, a SPAC backed by Formula One owner Liberty Media Corp, exceeded the size of the offering by 20 times, according to a person familiar with the matter.

Liberty Media Acquisition did not respond to a request for comment.

Many amateur traders complain that only Wall Street funds can buy at the IPO, relegating mom-and-pop investors to buy shares during a first-day rally.

“I have not seen my brokerage having SPACs IPO available unfortunately,” said Heath Augustover, an amateur trader and government worker in New York who has invested in SPACs for more than a year.

The perils for investors are increasing as more SPACs come to market. Some 189 SPACs have raised $60 billion so far this year, more than half the $83 billion total for all of 2020, itself an annual record. Were they to maintain this pace, SPACs would raise more than $300 billion this year.

To be sure, there is a floor on investors’ potential losses in SPAC shares. If a SPAC does not find a deal, it has to buy back its shares at the original IPO price.

But investors can lose most of their money if they bought in at the peak of a rally. Some investors who have held on to shares after a deal closed have seen the value of their stock drop below the SPAC IPO price, as was the case with healthcare services provider MultiPlan Corp and wholesale mortgage lender UWM Holdings Corp,

“What’s fueling the increase in pre-merger share prices is this guess that the post-merger share price is always going to rise, regardless of the deal. That makes sense only if we are in a bubble,” said Michael Klausner, law professor at Stanford University who has studied SPAC performance. 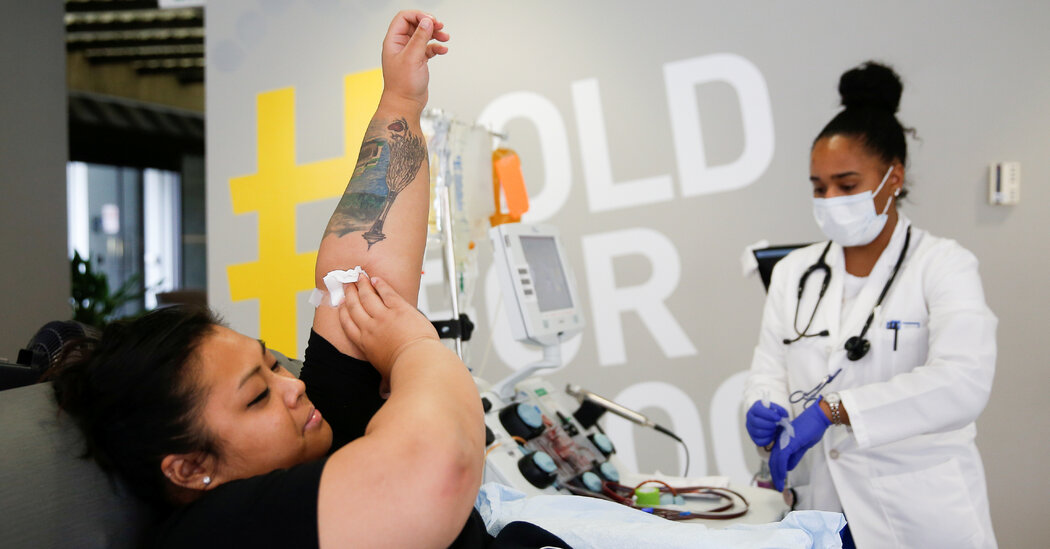 The Covid-19 Plasma Boom Is Over. What Did We Learn From It?
2 mins ago